Panja weaving is a part of India’s glorious weaving tradition. This craft is used mostly for making light woven rugs, and it gets its iconic name from a metallic claw-like tool called 'Panja' in the local dialect. This tool is a bit heavy and used for beating the weft threads in the warp so as to adjust them there, and the beating is directly proportional to the stability of the rug. 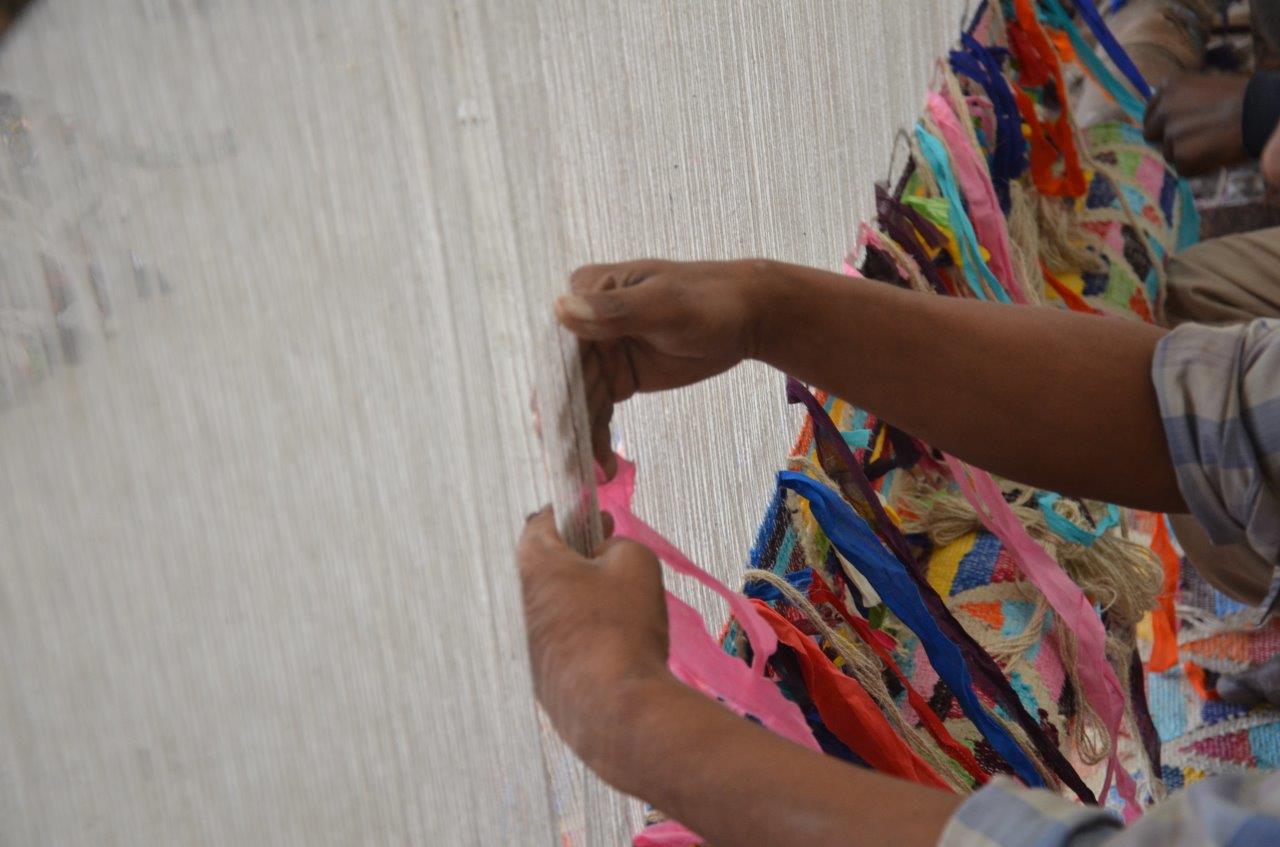 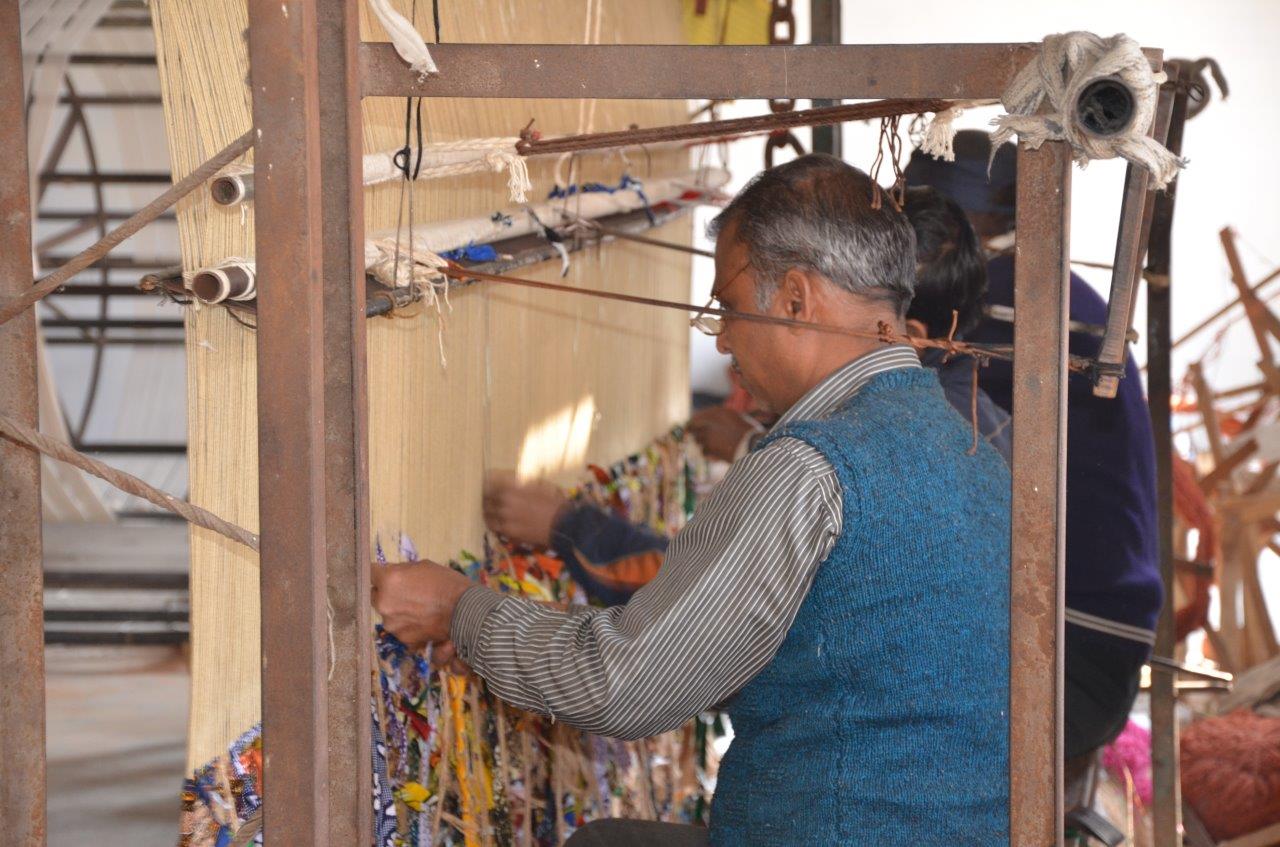 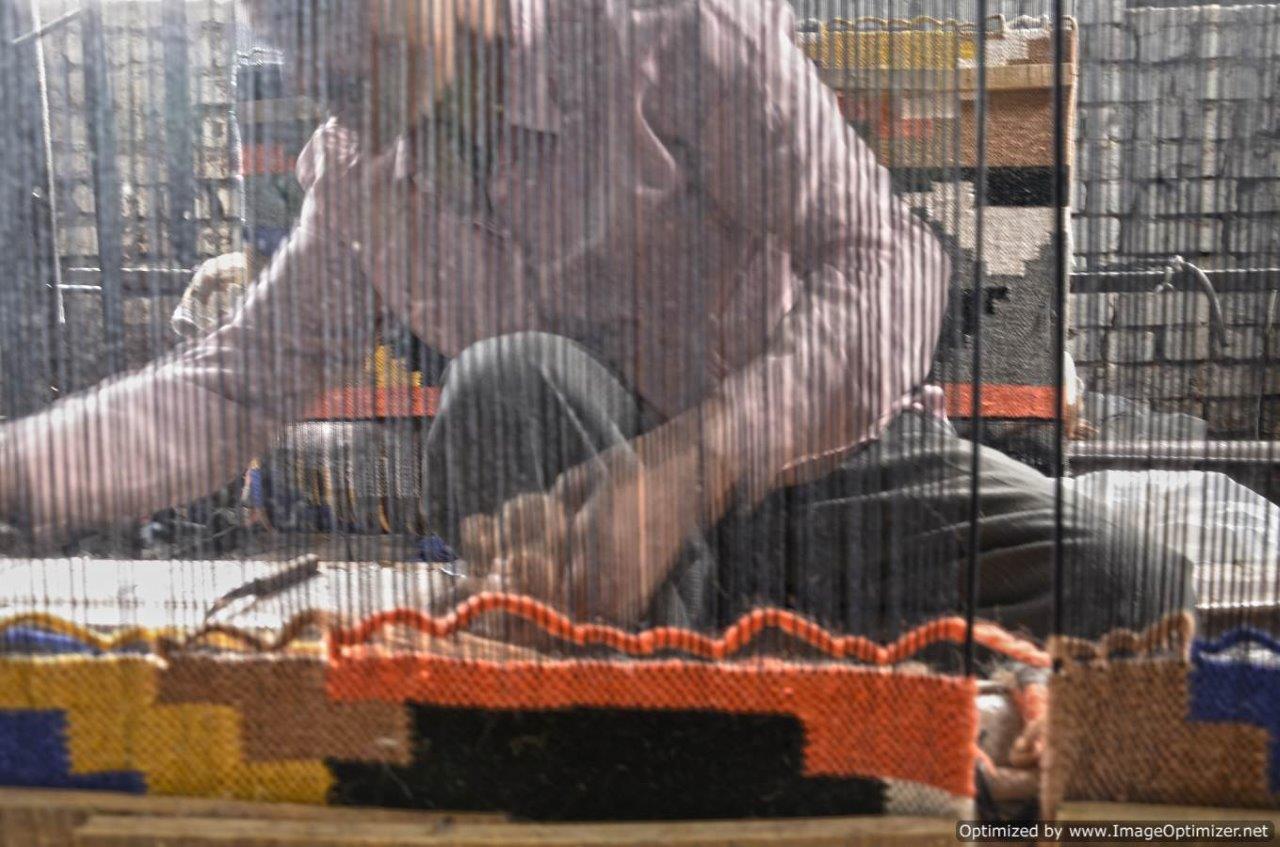 After the dyeing process, the yarn is normally received by the weavers in the form of hanks, after which the yarns needs to be freed from tangles & stretched in order to make them tighter. For this, it is taken through a process of reeling using a 'charkha' (manual spinning wheel). This being a light weight job, it's mostly done by women. 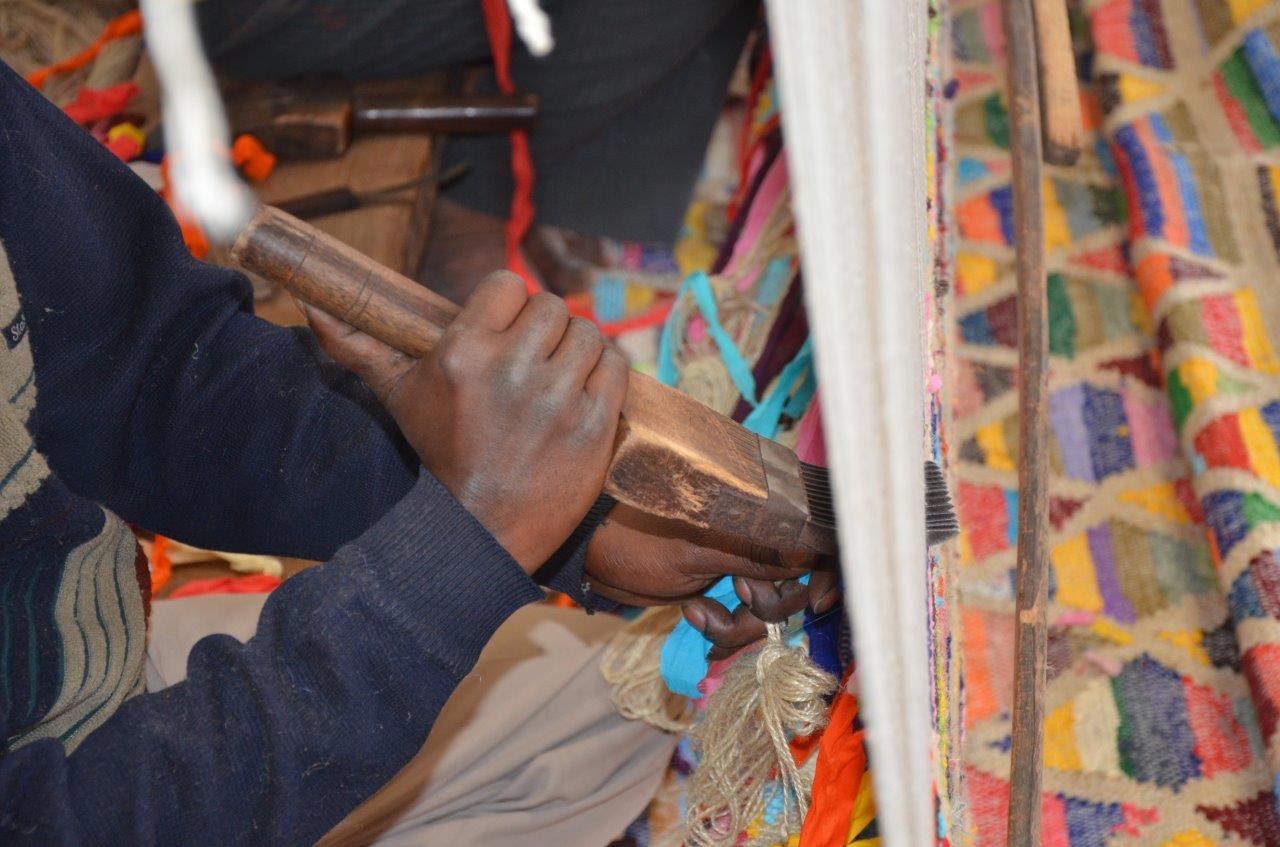 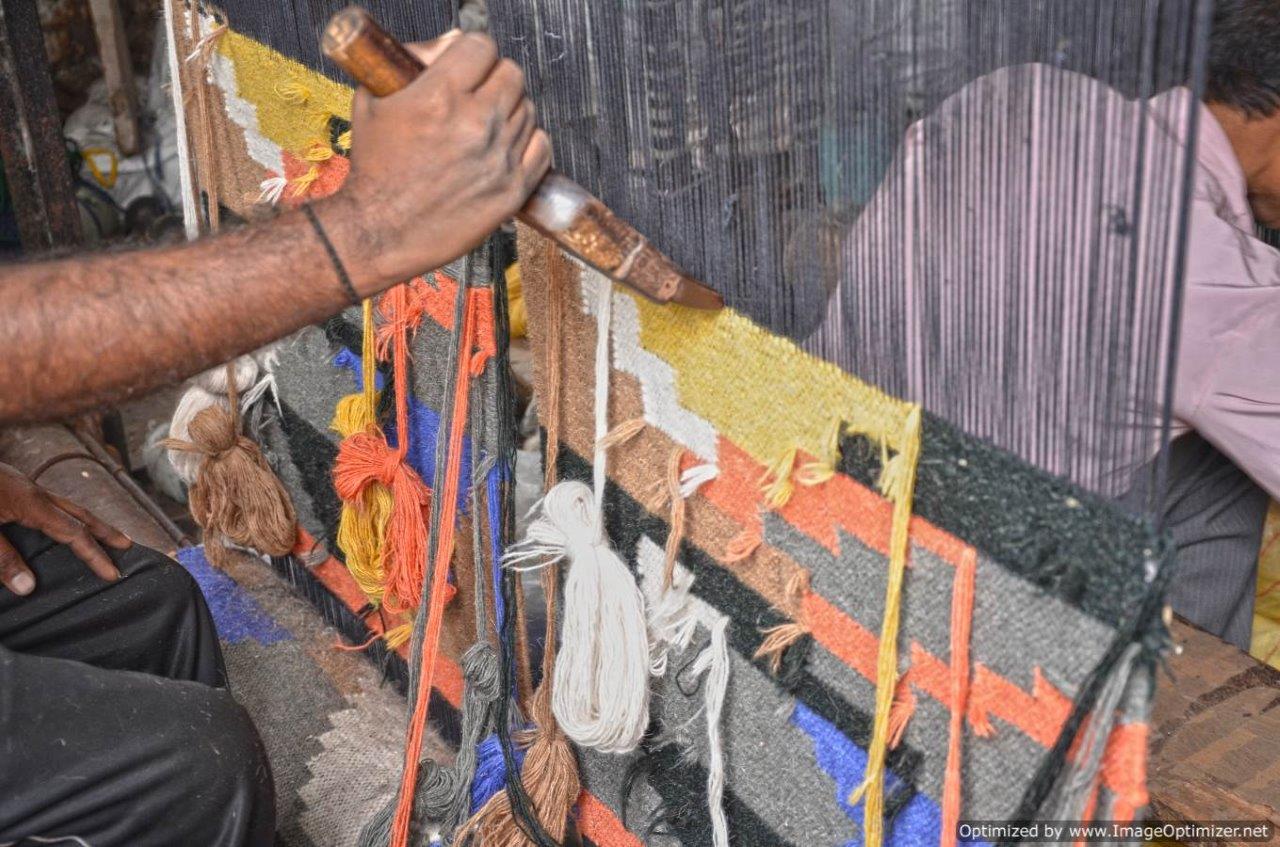 The master weaver carries out the process of warp making depending upon the requirement of the design and color combination. He uses the taana (warp) machine for this. The thread rolls are put on the vertical frame in the desired color combination. This is a movable frame. The ends of the thread are taken from the rolls, passed through another, smaller, grid-like frame that guides the thread, and are wound on a octagonal cylinder in a combination that the master weaver decides for making the taana roll. This process starts from one end of the cylinder and goes on till the entire cylinder is covered with thread. Once this is achieved, the log upon which the taana is wound is fitted into the blocks between the cylinder and the frame. The tightly wound thread on this log is then provided to the weaver who uses it on the loom frame.

The main equipment used in Panja weaving is a vertical frame loom, which is composed of two horizontal beams on which the warp is fitted (unlike the other big looms of carpet making involves). This loom has a vertical frame made of two beams (either of wood or iron) that are horizontal. The first beam is about 2 feet above the ground, and the other is at about 6 feet from the ground. The upper beam is movable and the two beams are tightened by using a screw-and-chain mechanism. The length of these beams varies depending on the dimensions of the rug to be woven. The taana (warp) tightened on these beams has two layers that pass through a horizontal metallic frame called the reed. The reed keeps the threads straight and equidistant from each other. Of the two layers of the taana, one remains on the outer side and the other on the inner side. However, this position can be changed using a mechanism called the 'kamana' (a V-shaped wooden frame where the ends are bound with a tight piece of rope) and 'ruchh' (two bamboo pieces on which the kamana in attached with the beam, just above the reed).
For weaving, the warp is bound on the two beams of the loom (the warp roll forms the upper beam and it is wound on the lower beam).The warp has two layers, which pass through a flat metallic reed that guides the threads by keeping them equidistant from each other. On the bench provided just in front of the loom, facing the warp, one or two weavers sit, depending upon the width of the rug. If the width of the rug is more then five feet, it will occupy the whole beam and in this case only one weaver can work on the loom. If its width is less than three feet, then in that case two weavers can work at the same time on two different carpets of less width (say three feet each) on the same beam and same loom frame. 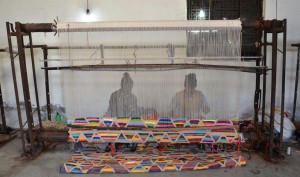 The weavers keep the design in front of them (either in the form of a graph or an artwork or maybe an actual sample) while weaving the first few articles of that design. After a while, when they have memorized the pattern, the work becomes faster. They pull a fixed number of warp threads, depending on the design, towards themselves and take the small bundle of weft across the warp threads to fill the gap longitudinally. To facilitate the design, the warp is marked at regular intervals to guide the weaver about the location of a particular feature (like a flower) in the design. Once one row of weft is completed, the weavers beat it to settle it tightly into the warp by using the panja. These bent metallic fingers of the panja move between the warp threads similar to a comb in hair. Once the weft threads are tightly beaten between the warp, the weaver exchanges the upper and the lower layers of the warp by using the kamana and rucch. This locks the weft between the two layers of warp, providing more strength and durability to the rug. The weavers keep tightening the warp by adjusting the two beams with tightening screws. This makes the rug crisp & sturdy and also its designs symmetrical. They go up the warp as they fill the lower part of the warp.
After completion of the weaving, the master weaver takes it off the loom and knots the loose ends of the rug (sometime also fold & stitch the edges as required), and also rectifies any problems that it might have developed during the weaving. For example, the rug may develop differential width at the fringes due to shrinkage. If so, it is then set tightly on a frame and kept there for a day or two so that it is stretched properly. The weaver then sends it to the clipper, who clips off all protruding threads & knots using a pair of scissors, giving the rug a smooth look. The rug is now ready! In case of a stone-washed rugs, the weaver sends it to the washer-man who washes it using water and detergents, and this lends a better shine & softer hand feel to the rug. Most of the Kilims that we see around our made with this technique.
Know the Craft